The History of St Mary's

This is an ancient church unused for services except very occasionally. People come to see the paintings and hear its story. Others, perhaps randomly whilst on holiday, or locals bringing friends, cycling or walking (Peddars Way).

When the Romans came they built a villa in the valley. Perhaps there was also a Roman building on the church site. Many Roman stones and bricks were used in the construction of the church. Did the villagers drag them from the villa or were they abandoned on the hill when the Romans left?

It was the Saxons who replaced the Romans at Houghton. We know little about them and so far finds are scarce. A length of wood found but not exposed underneath the floor might have been the foundation of an earlier wooden church. Excavation work to uncover more of the site is vital if we are to begin to understand its prehistory.

Whether the stone church is earlier than its given date of 1090 is debateable. Certainly there is Saxon influence, but Saxon builders would also have worked in Norman times. Domesday tells us that King Edward, King Harold and the Godwin family owned land in the Pickenhams and other local villages. Might they have commissioned a church here?

In 1066 there was one unnamed free man as lord at Houghton. In 1086 the lord is named as Herluin, son of Ivo, with a tenant in chief Reginald (Rainald), also son of Ivo.  Unfortunately, neither Ivo nor Herluin can be identified precisely. There are several lords named Ivo and it has been doubtfully conjectured that Herluin may be possibly connected to the Conteville/LeStrange family of Hunstanton.

At some time around that period Houghton became part of the estate of Ribald of Middleham. He was the brother, perhaps illegitimate, of Alan Rufus, 1st Lord of Richmond who gave him the estate, and through him the estate descended to the de Neville family. It may have been Ribald who built the church and commissioned the paintings, if the 1090 date is correct. 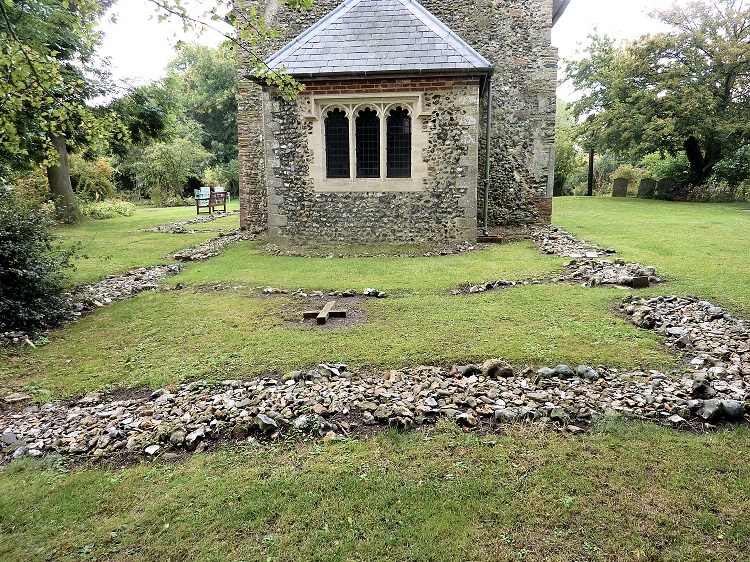 The stones mark the medieval chancel which was only a foot shorter than the original nave. The cross marks the spot where a stone flat tablet was unearthed. Could it have been the original stone altar?

The Tudors to the 20th Century

The 11th century church consisted of the nave and a small, probably apsidal, chancel. There was a round tower but no date for its build has been established. At some time, either in about 1150, or later in the 13th century, a south aisle was built. As part of an excavation a tomb stub, together with some undateable human bones, were found within its confines. Perhaps the later date is correct and the south aisle forms the chantry granted to the church by Mary de Neville in 1287/88 for masses to be said for her late husband Robert de Neville and her family. The aisle was poorly built with no foundations and collapsed during the next century.

At the time a small village had been established to the north of the church and the estate appears to have been well-managed. By now the village belonged to the Honour of Richmond which brought tax and toll advantages, Peddars Way and other tracks were well-established trade routes and the Brecks were ideally suited to sheep and rabbit farming. Houghton was little affected, it seems, by the 14th century wars against France and the Black Death. At least it was given no tax rebate.

Between the 14th and 15th centuries the church was remodelled, including the construction of the square tower, the demolition of the south aisle and the lengthening of the chancel to within one foot of the length of the nave. The rebuild may have been influenced by Sir Robert Knollys who tenanted the estate at the time and also restored other churches locally where he held land.

Very little is known about life in Houghton from the Tudors to the Victorians.  As far as we know most of the villagers were agricultural workers on the estate, now the South Pickenham estate.

The church was amalgamated with that of North Pickenham in 1558 and by 1603 there were only 15 communicants in the village. We are told that in the 17th century there were 32 cottages and a watermill and at some time in the 18th century most of the villagers were relocated to Houghton Common. No reason has been found - possibly it was merely the building of housing for the estate workers. We know that in 1725 one of the two bells was sold to Swaffham parish church and that in 1760 the rector, Revd Robert Say had the long and dilapidated medieval chancel demolished and the small one we see today (although much restored), built in its place.

Through the 19th and early 20th centuries censuses show a stable population of about 42, but the number of children born and remaining in the village decreased steadily. Doubtless this was caused by labourers who came and went depending on the available work during the deep agricultural depression of the time. New estate owners brought with them new ideas; it became a shooting and hunting box; the cow herds were sold. The tenants moved out and one by one the cottages were flattened. The 1939 Register shows a population of 18 living in five houses with two vacant.

Between 1892 and 1896 the church was renovated and the thatched roof replaced with tiles.  With no heating, poor lighting and fewer parishioners the church services faded and then disappeared. There were two marriages in the early 1920s, a christening in the 1930s and the last service was probably the one held in 1944 for the USAAF who were stationed at North Pickenham airfield and used the tower of St.Mary's to guide them home.

Gradually the church disappeared from view, cloaked in a mass of ivy and brambles. Children played there until it became too unsafe. The occasional youth group would tidy up the graveyard. Walkers passed it by. Like Sleeping Beauty, it lay waiting for its Prince... 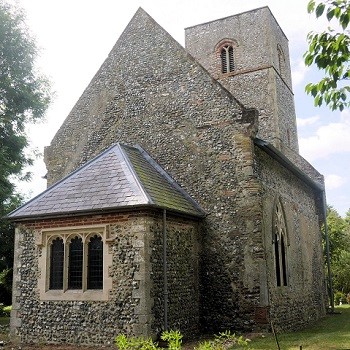 St Mary’s is a mixture of architectural styles from the Saxon to the Victorian. 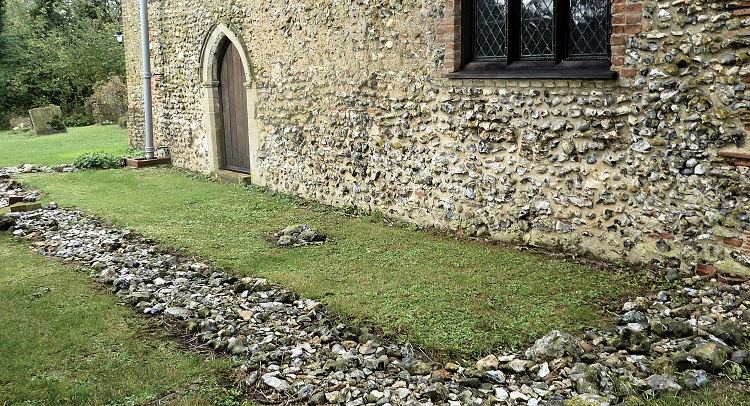 The stones mark the south aisle. The cairn in the middle is placed where the tomb stub was found.