Somewhere, underneath all the ivy.... 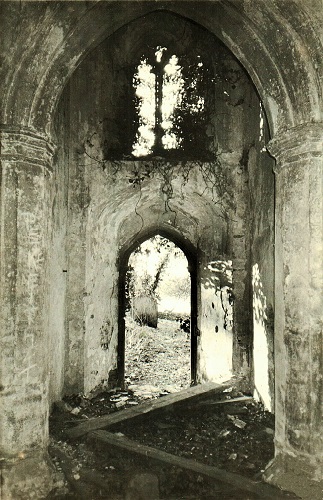 Villagers may have deserted their cottages and church but historians, detectorists and church lovers still knew it was there.  In 1953 a local newspaper reported that "ivy and brambles surged over the walls and unhampered through the windows. Plaster was crumbling from the walls to form a damp and dirty carpet."

A 1982 photographic survey revealed that the exterior was totally covered in ivy except the west door, the interior was full of rubbish and there was evidence of digging within the chancel. In 1987 it was listed as a Grade II building. In 1990 a site visit described it as being in a dangerous condition. No glass remained in the windows, no roof remained on the tower, large holes were present in the nave roof and window tracery and ledger slabs had been broken, exposing burial vaults.

Two years later Gloria Davey, who had not long before moved to North Pickenham with her husband, joined a WI ramble which led past the church. Seeing the "indistinguishable lump" under the foliage she was intrigued enough to investigate. She found a ruined church which also showed signs of satanic use and told her husband Bob, a retired engineer with a long service as a churchwarden. Satanists "were defiling a consecrated church" he said, and realised that he had to do something about the situation. This decision was going to take over the rest of his life.

In 1993 and again in 1995 and 96 Bob, backed by Norfolk County Council under the Ruined Churches Repair Programme and a few volunteers, cut back the ivy growth, removed vegetation, repaired part of the structure, reroofed the nave and chancel, repointed open and defective joints, inserted honeycomb brickwork blocking to windows and rebuilt the north nave doorway. The inside was cleared, a new floor laid, glass installed in the windows, a path to the church constructed, missing church furniture found.  The bell tower was repaired, a new cradle fashioned and the original bell found and hoisted. By a mixture of luck and persuasion, St Mary's was able to ring in the Millennium. In 1997 the building upgraded to a Grade I listed building.

Bob paid for much, managed to coax other funding or did the work himself.

It was in 1996 when a contractor spotted paint in a corner of the nave and suddenly what was just a restoration of an ancient but lowly country church was transformed into an international treasure.  Paint had been known, but forgotten. The first recorded mention of paint on the walls had been on the invoice to restore the church in 1894 "paint on wall not to be touched".

No date. The east window has been protected with honeycomb brickwork. The two niches either side of the entrance to the chancel were not part of the original build but no date has been ascribed.  The chancel arch was originally horseshoe.

The international significance of the paintings was quickly recognised and many reports commissioned on the environmental risks to the paintings before the decision was made in 2006 to open up and stabilise the paintings where the plaster was already deteriorating.

The works of repair and consolidation undertaken at St Mary’s Church have attracted both local and national awards, including the Norfolk Society/CPRE Award (1996), a certificate of commendation in the Ian Howard Design Award of Breckland District Council Award (1998), and the joint RICS Building Conservation Award (1998). This last award was a joint winner with Windsor Castle after it was restored after a fire in 1992 which destroyed 115 rooms.

Church Army: A Norfolk churchwarden called in the local Territorial Army unit to keep devil worshippers away during the winter solstice. 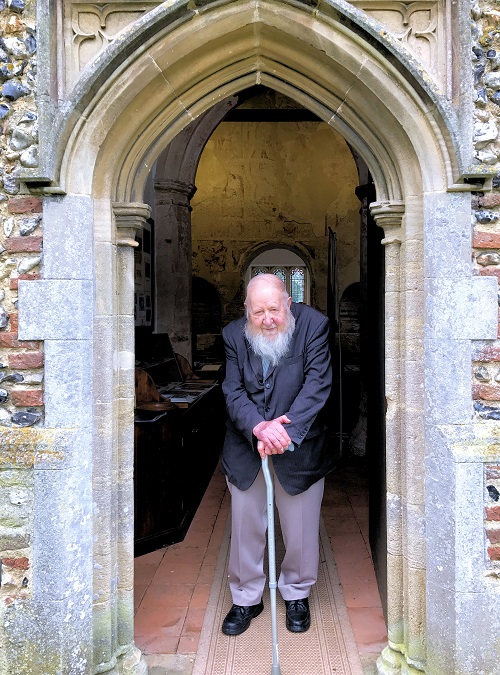 Bob Davey MBE in the church he made his own through vision, determination, and sheer hard work

From The Guardian 10 Jan 1996. From the very beginning Bob had been physically hounded by members of a Satanist group who had used the church and its environs as a place of assembly. Bob was insistent that they should not be allowed to desecrate the church in this way. A telephone call from the local Territorial Army solved the problem. They guarded the church overnight when the group was expected and turned them away. The story was picked up the the national Press. The Satanists have never reappeared.

The Charitable Trust, The Friends of St Mary's Church, was formed in 1998 as a steering group. Today, its trustees and volunteer workforce manage the running of the church, organise fundraising events and welcome visitors to the church. St Mary's is still a consecrated Anglican church, and operates under the direction of the Diocese of Norwich.