The Roundels on the East Wall

There are at least six layers of paint at St Mary's. The original scheme dates from, at latest, 1090 and is visible on all four nave walls. A second, decorative, layer dates from the 15th century and a third is post Reformation text, of which only a fragment remains.  In between each is a layer of limewash.

The paintings were covered over by, at latest, the mid 18th century, but probably much earlier.

It is the early scheme that excites attention.

A study has suggested that the basic ochre paint may have been applied on fresh plaster in a fresco technique. The iron oxide red outlines were usually painted directly on to plaster, although in some areas a limewash was identified.

The range of pigments used showed some sophistication. Mostly made up of earth colours such as red and yellow earth, lime white and green earth, a very early use of red and white lead and the expensive vermilion was identified. These last would have been painted secco.

The east wall is dominated by large and unusual Last Judgement of which the centrepiece is a huge Trinity within a triple mandorla. Unfortunately, only the journey to Heaven is visible and only a hint of the flight to Hell remains.  God sits on a throne or stool supporting a cross on which Christ hangs. To the north between the two flies a dove, representing the Holy Ghost. All three wear haloes. Around the mandorla, the Blessed, also haloed, gaze at the godhead. 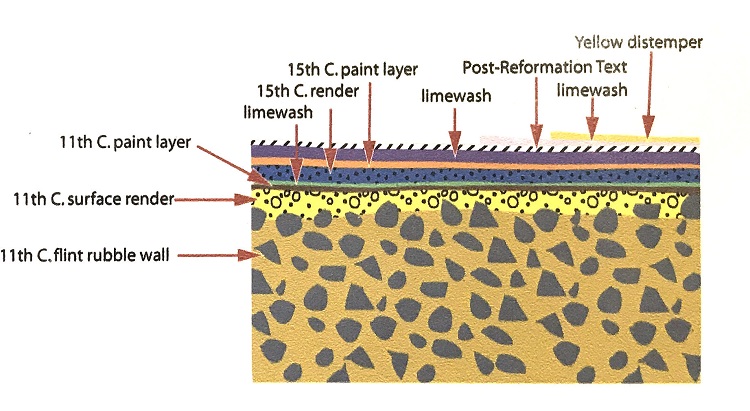 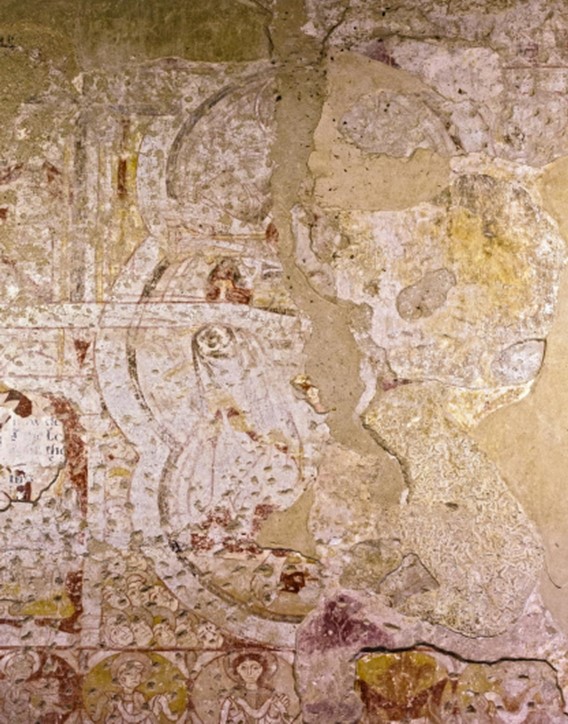 Underneath, a set of roundels of figures hold, according to the experts, scrolls of texts. Those to the north are haloed, suggesting disciples or saints, all beardless and with fair hair. In the centre is a figure wearing a crossed halo looking straight ahead, which suggests Christ. To the south only two roundels remain, both showing devilish figures, but very indistinct.

Beneath the roundels on the north side is a depiction of the Raising of the Dead. The scene is flanked by two angels blowing trumpets. The dead push their way out of their graves.

On the south side a trace of an angel still remains which suggests a similar scene, although the iconography does not fit well.

The story on the south side of the east wall eludes us and although we may be curious to know what exactly lies under the plaster we cannot destroy history to reveal history - each layer of paint tells its own story. We are waiting for technology to become advanced enough to be able to penetrate plaster to reveal underlying wall paintings. 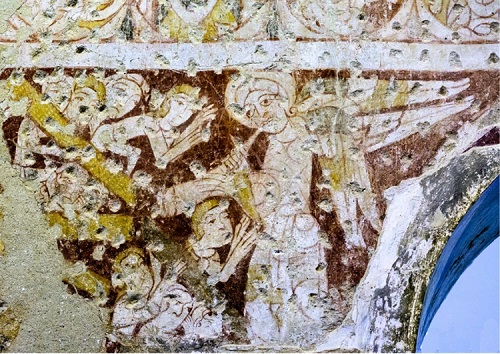 On the north wall the most visible scene is the Creation of Eve. Here a large haloed figure of God, with fair hair, has pulled the equally large figure of Eve from a much smaller Adam who sits slumped against a tree.

The scene to the west is possibly of Noah's Ark. A red-robed figure with red or pink hair and holding his arms aloft can also just be discerned. 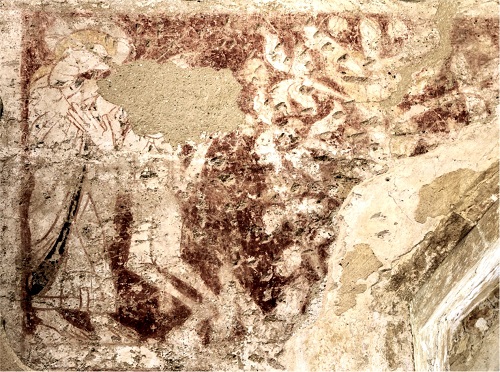 The West and South Walls

Very little remains of the paintings on the west and south walls. Both were subjected to alteration and realignment over the centuries, which destroyed much of the story.

On the west wall an evil figure can be seen, his face in profile, with a hooked nose and spiky hair, clutching the leg of an upside-down man.

The south wall paintings were lost when the south aisle was inserted in the 12th or 13th century.  What is left, however, is notable although very faint. A figure in a white robe reaches up to grasp with both hands what appear to be the spokes of a large wheel. The man is bearded and wears a red beret style hat. At his waist is a thick red belt. His legs are widely spaced. The wheel is consistent with the iconography of a Wheel of Fortune or of Life. The scene, which is at the centre of the wall, would have been its dominant feature. If it is a Wheel of Fortune it is the earliest surviving depiction in the country.

An artist's drawing of the figure

No exact parallel for any of the paintings has as yet been discovered in England or abroad, although several resemblances have been noted. For example Clayton, West Sussex, one of the Lewes Group of early churches also has a comparable Last Judgement and mandorla, although the mandorla is single and centres on Christ. Interesting too, is that both Lewes Priory and the priory at Castle Acre, ten miles from Houghton, and also dating to around 1090, are linked through William de Warenne (died 1088).

The question that immediately springs to mind is why at Houghton-on-the-Hill?  It is possible that many churches at that time were similarly painted. However, the use of vermilion, which had to be imported, plus the design which, although not sophisticated, shows a high level of art, suggests a wealthy patron.  Were they travelling artisans trying their luck, or were they commissioned?

And are the men in the roundels carrying scrolls? Both snakes or linen have also been suggested.

And why did they paint over them in the 15th century?  Had they become boring? Did the story they told detract, perhaps, from a more gentle or different theology? During the 15th century much changed at St Mary's including the estate occupier. Did he want to show his wealth by repainting the church as well as redesigning? We shall probably never know. Interesting, too, is that whereas the later paintings have mostly disappeared, the original ones have stubbornly clung on.